Paul Ryan’s tenure as Speaker of the House has been a utter failure – by Ryan’s own metrics if not perception. After 20 years in Congress, we can all finally say:

Paul Ryan is a logical, if immoral, man though. A man of stated principles – Christianity is good, taxes are bad, poor people deserve it – Ryan came to Congress with an agenda and a mission. And he screwed it up by his own standards. Let’s take a look at some things Paul Ryan failed to accomplish: 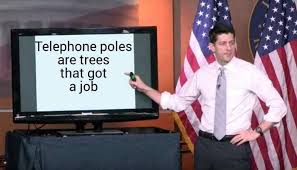 Paul Ryan sees himself as a job creator. Ryan came to Congress to make safer, better-paying jobs for the American People. Or at least he tried. While jobs have obviously been created during his speakership (and before – Thanks, Obama!), the quality of employment and real wages has only gotten worse.

The unemployment rate can be a deceiving number – one Ryan uses as it seems fit – but gutting of benefits and corporate responsibility #TaxCut has made the job market a more dangerous place for the American worker.

While Ryan decries political polarization, he actively instigated and participated in the polarizing politics of the GOP. It’s like Ryan in his 48 years has never seen Mean Girls.

But, sadly, Ryan in fact made a cake out of neither rainbows not smiles. And, no, all did not eat it and become happy. Ryan in fact sold all of our rainbows and smiles and then didn’t tax the rich for it.

From Facebook’s comment section: “Now will you go away?? You have lost this election for the people that gave you the chance to do something great….it turns out , you threw it away to help YOUR democratic family.”

4. Go on a date with Alexandria Ocasio-Cortez

Described as a darling of the left (would we call a rising male political star something like?) and a darling of many a Senator’s heart, Ocasio-Cortez gets more right swipes than anyone on the left. While apparently Mike Pence has dibs, Paul Ryan can still dream.